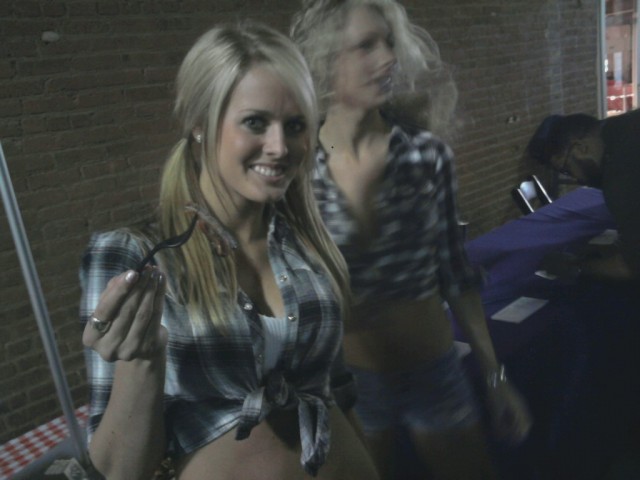 This is a guest blog post by Adam Poch, the Heavy Metal Teddy Bear, on CBS’ Big Brother Season 13. If you watched CBS’ Big Brother 13 over the summer of 2011, you saw me wearing Bacon T-shirts and screaming about the best food god ever created. To say I love Bacon would be an understatement! For the last 3 years, the last Saturday in January, la venue in NYC has hosted the Beer, Bourbon, & BBQ Festival. Bars & restaurants from NYC and all over the east coast as well as beer & bourbon distributors fill up the exhibit hall giving people lucky enough to get tickets tastes of the best they have to offer. There are 2 sessions, but every year I go to the early one nicknamed “THE BACON BASH”

As soon as you walk in, you get a sampling glass, and you proceed into the main hall. Standing right inside are the Daisy Dukes & Boots Girls handing you strips of crispy bacon! This is a great way to start any Saturday afternoon, hot chicks giving you bacon!! I am only going to recap the foods I ate – because there were soooo many different bourbons and beers I tasted, but I wanted to give a shout out to Cabin Fever Spirits for having the best thing I have never tasted before today. They make a Maple Whiskey that is just out of this world. Its so good that I want to make a plate of French Toast & Bacon and pour all over the top!

The following are just some of the highlights from my food consumption. Needless to say I may have forgotten a couple places due to the amount of Beer & Bourbon I was consuming throughout the afternoon.

I am sad that this event only comes to NYC once a year – but the good thing for everyone reading, they do this event at several cities on the East Coast – so go to their website and see when & where they will be. If not – you know where to find me on the last Saturday of January every year!!!

This is a guest post of Jim, the man who made the Bacon Beer we reviewed on Bacon LIVE. Jim is a former Executive Chef and restaurant manager who works now at the College of St. Rose in Albany, NY, running all of the retail food operations there. I ask Jim to explain to how and why he made the beer and this is what he sent me.

Jim Writes: I like to think of this as a “Breakfast Brew,” as it contains so many elements of a hearty breakfast. I used dark malt extract; caramel, crystal, and chocolate malts; and Northern Brewer and Cascade hops. Essentially, the base of the beer was a Guinness clone, and any Irish Stout homebrew kit would have a similar effect.

At the start of the boil, I added some oven-toasted, steel-cut oatmeal, brown sugar, Vermont maple syrup, and whole beans of Starbucks Komodo Dragon coffee. I baked a pound of thick-cut bacon until crispy, drained the fat into a Tupperware container (saved for later), and added the cooked bacon about 15 minutes from the end of my hour-long boil, the same time as I added the Northern Brewer finishing hops. That went into fermentation for a week.

I put a cup of vodka in the Tupperware with the bacon fat and stored that in the fridge for the week while the beer fermented, making a bacon extract to add a little extra bacon flavor to the batch right before I bottled. Also, for my bottling, I made a simple syrup with hickory Liquid Smoke, water, and sugar, and added a Â¼ teaspoon to each bottle to carbonate it and give one last hit of smokiness. The beer bottle-conditioned/lagered for 3 weeks.

I find that this is best enjoyed room-temperature to slightly-chilled. If itâ€™s served very cold, the bacon flavor fades away. The bacon flavor hits most if you let the beer sit on your tongue for a moment rather than drinking it down straight away. The coffee is strong in the front, the oatmeal subtle in the middle, and the bacon and smokiness follow through in the end. The maple syrup was somewhat lost in the process, but itâ€™s in there!

All of my equipment is bought at Hammersmith Homebrewing in Latham, NY, a family owned-andâ€“operated store that can be found online at http://www.hammersmithhomebrew.com/. They have great prices and selection, and are very knowledgeable about the craft and eager to help others learn to make great beer and wine at home.

I currently have a high-gravity Banana Oatmeal beer bottle-conditioning, a Vanilla Clove mead fermenting, and as I write this, Iâ€™m making a BBQ Beef cream ale.

Glad you enjoy it! -Jim One of the things that baffles me about women (and there are thousands) is their love for jewelry. Only one thing can elicit a cuteness-inspired squeal from a girl faster than some confabulation of stones and shiny objects. (That, of course, would be puppies wearing scarves.) They blow wads of cash on their beatifying self-decoration while most guys wouldnâ€™t notice anything amiss if they were just wearing aluminum foil. Granted, girls donâ€™t dress for guys. They dress for themselves, for other girls and for the right to call other girls a whore for wearing a sequined tube top, even though they own the same one. But ladies, if youâ€™re trying to attract a real man there are jewelry options that can work to your advantage.

May I suggest â€¦ the Bacon Bracelet. This fine piece of meatwear is printed from a high-quality photograph onto very durable, pliable plastic. Let me repeat that: it is plastic and for decoration â€“ do not attempt to chew/suck on it. Even tastier, the bracelet closes with a lobster clasp. It may be that this is just a name for a closure mechanism similar to a lobsterâ€™s claw, but Iâ€™m playing my â€œignorance is blissâ€ card and assuming itâ€™s actually fashioned from real lobster.

So if youâ€™re tired of striking out with the fellas, take your game from posh to pork with the Bacon Bracelet. And guys, if youâ€™re into wearing bracelets, this is probably the way to go.

As a safety disclaimer, we should mention that there are several potential health risks to this sort of delicious fashion statement. Your wrist will be prone to fierce attacks from dogs, squirrels and Midwesterners. Additionally, studies have shown that your risk of heart disease increases by up to 12% as soon as it comes in contact with your skin. Also, itâ€™s practically inevitable that one day when youâ€™re suffering from a bacon deficiency, temptation will override common sense and leave you choking on a piece of palatable plastic. Think back to your last birthday. Some of your friends probably went to the store the night before and sat in the cake aisle trying to remember what your favorite type of cake is. They argued the merits of chocolate versus vanilla, danced with the idea of an ice cream cake and the one girl that listens exclusively to top 40 hits probably chimed in with a funfetti suggestion. And you were probably very happy with whatever they made for you, because it meant you had good friends and your pie hole was full of cake (and therefore a minor identity crisis).

But they never made the cake you really wanted. Even if you say Red Velvet is your favorite and they couldnâ€™t have made a better choice, youâ€™re wrong. You didnâ€™t get a bacon cake.

Well this guy did.

I was pleasantly surprised on my birthday with this heaping homemade cornbread cake, topped off with a bacon-cream cheese frosting. They even stabbed it and made icing blood to remind me that while my eyes were seeing cake, I was tasting the sweet chewy goodness of applewood smoked bacon.

It wasnâ€™t your typical sweet cake, but like all you bacon enthusiasts, I would take cured meat over something sweet any day. The cream cheese frosting mixture gave it just enough sweetness to set off the delicious pork infusing it. And though it may be the southerner in me talking, no type of bread goes better with bacon than cornbread.

When your friends can take a birthday and turn it into a bacon girthday, you know youâ€™re surrounding yourself with winnersâ€¦ and possibly fatasses. With Mosley’s talk about taking things to the next level, and Taco Bell’s introduction of a Bacon Cheddar Gordita Cruch, I started thinking about instances where an outstanding fixture has reached new heights with an unexpected ingredient.

History is filled with such occasions. For example look at Mike Tyson. The guy would have been a pretty fantastic boxer in his own right, but letâ€™s see what happens when you throw in a healthy dose of unabashed insanity. You get an unpredictable manchild that, rather than backing down in a fight, will chomp at the extremities of one of the most respected veterans of the sport. And to make his comeback and finally regain respect in the community, he shows up looking like this. A dash of the unexpected can elevate greatness into blow-your-mind and mess-your-pants legend.

Which leads me back to the topic of this blog and to a few of my favorite all-time products: Moâ€™s Bacon Bar and Left Hand Milk Stout. Both of these products took it to the next level by tossing in something you wouldnâ€™t expect.

If you havenâ€™t had a Moâ€™s Bacon Bar by Vosges, sprint to the nearest Whole Foods, walk right past the $8 price tag and experience the sexiest chocolate bar since this inappropriate creation(NSFW). This is the Mr. T of chocolate bars — bitchingly awesome and full of meaty goodness. The applewood smoked bacon and Alder wood smoked salt perfectly set off the sweet of the chocolate for an experience everyone can enjoy. In fact, I have a friend who works at Whole Foods and sampled this to a woman without telling her what it was. Then he noticed all the soy and Boca products in her cart. And even she liked it!! (That’s actually not true — she was livid and filed a complaint with the manager — but you know deep down she was satisfied.)

The Left Hand Milk Stout is brewed by one of the most creative breweries in Colorado, which is saying quite a bit. Itâ€™s a nice, full-bodied stout infused with milk crystals that give it a sweet, creamy finish. This gives it some personality without turning into a dessert beer like a chocolate stout. I highly recommend it.

Could bacon possibly go with other dessert type foods? Of course! Thatâ€™s like asking if duct tape can be used for more than tying up siblings. Check out YesButNoButYesâ€™s collection of bacon dessert recipes, including Bacon Baklava and Pig Candy.