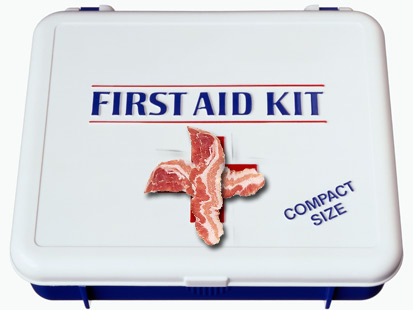 We all know bacon is amazing. It tastes good, smells good, and even has the power to make the strictest of vegans knees buckle but did you know that it also has the ability to save peopleâ€™s lives. Thatâ€™s right those beautifully crisped up rashers sitting next to your eggs just might be a medical miracle.

Those of us that love bacon have seen story after story about how bacon is going to kill us so itâ€™s about time we look at the benefits of this cured pork product. There is a rare disorder called Glanzmann Thrombasthenia that can result in life threatening hemorrhage particularly from the nasal vaults. In laymenâ€™s terms that means your nose will start bleeding and wonâ€™t stop until youâ€™re dead. But there is new hope for those out there those that suffer with this horrible disorder and the hope comes in the form of, you guessed it, bacon.

Some Doctors have discovered that by packing the nasal cavity with cured pork via a kind of bacon tampon the bleeding stops. Twice a 4 year old child that suffered from Glanzmann Thrombasthenia was admitted to the emergency room with a life endangering nose bleed and twice doctors treated the child with the pork up the nose method. Both times the bleeding stopped within 24 hours and the child was discharged within 72 hours after the treatment.

This is a huge breakthrough in the medical/bacon world and to think if some people (like health nuts, vegans, and some government officials) had their way we wouldnâ€™t even have bacon and that 4 year old child could have died.

Iâ€™ve said it before and Iâ€™ll say it again, bacon truly is the most amazing food on the planet. It goes with everything pancakes, chocolate, burgers, and life.