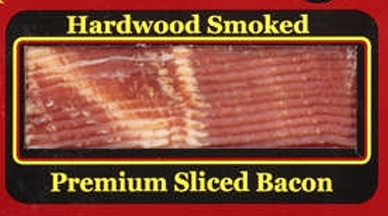 As we pointed out on an episode of Bacon Live, Burger King has introduced new thick cut bacon that they describe as being â€œHardwood Smoked.â€ This kind of confused us because most companies arenâ€™t that vague with their bacon descriptions. In fact most companies seem proud to tell you what type of wood they use in their smoking process.

Wendyâ€™s went all out to let you know their bacon was Apple Wood smoked, Dunkin Donuts proudly said in their commercials that their bacon was smoked with Cherry Wood, and even though Dennyâ€™s is using the same bacon they always have they started letting people know that it was Hickory Smoked but some companies just donâ€™tâ€™ want us to know what type of wood they use.

Iâ€™m not just picking on Burger King; long time bacon producer Oscar Mayer also lists their bacon as being â€œHardwood Smoked.â€ So that got me thinking, what exactly is Hardwood? (and stop laughing right now or youâ€™ll be excused from the class.) According to the Wikipedia entry for â€œwoodâ€ all wood from the dicotyledons family are considered hardwood. That basically means if it has broad leaves and flowers like Oak itâ€™s a hardwood. So when a company says it uses hardwood that means it could be using one of almost 100 different woods or a combination of them.

There are reasons why a company might choose to go with a lesser known wood or a mixture of different woods. It might be they fill they get the best flavor from those woods or maybe it is a cost thing where they donâ€™t want to inject smoke flavoring but itâ€™s not cost affective to use Apple Wood.

Whatever the reason is they need to stop advertising it as â€œHardwood Smoked.â€ When you have restaurants gloating about the wood they use and then you see some company slap Hardwood on their label it makes them seem like theyâ€™re just trying to jump on the band wagon without improving their bacon.

If you donâ€™t want to tell us what wood you use because itâ€™s a cheaper wood or because you use a mixture and â€œhickory/apple/cherry/oak smokedâ€ wont fit on the label, thatâ€™s fine. Just leave it off. Trust me if you make a quality product just labeling it as bacon is enough for people to buy it