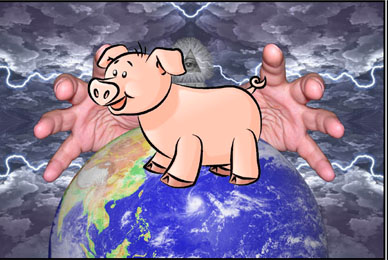 The Jan 6th episode of NPRâ€™s Podcast Planet Money had a very interesting topic, Lard. They talked about how everyone used pig fat for cooking a hundred years ago but now itâ€™s almost no where to be found.

Most people think the whole reason lard cooking went away is because itâ€™s unhealthy for you but thatâ€™s really only half of the reason. It turns out it was a combination of the back lash from the 1906 novel â€œThe Jungleâ€ that exposed the horror stories of the meat processing world and Capitalism.

Although â€œThe Jungleâ€ is fiction it was very well researched and showed some of the very unsanitary and dangerous conditions in the world of animal products. After it was released people demanded better care be taken in the preparation of their food and people even started to shy away from mass produced meats. Slaughter houses today might not be perfect but there a heck of a lot better than 100 years ago.

Then you have the company that produced the lard alternative Crisco, Procter & Gamble. They werenâ€™t always in the business of producing healthier ways of making fried chicken. They were in the candle business, and business was good. Everyone from the richest tycoon to the poorest steel worker needed candles. It was the only way a person could do anything after the sun went down besides sleep.

But then something happened that changed the world, the light bulb. The light bulb was on the fast track of replacing the need for candles in America and that meant Procter & Gamble had to reassess their business. The candles they produced were make out of cotton oil and with not as many candles needed that gave them a cotton oil surplus.

What did they do with that extra oil; they got a German scientist to figure out a way for people to eat it. By using the process of Hydrogenation they turned the now useless cotton oil into tubs of white paste that resembled lard and called it Crisco. Then it was as simple as starting a mass advertising campaign to convince the American people Crisco was better than lard and the rest is history.

Is Crisco really better for you than lard? Itâ€™s a hard question to answer because most of us arenâ€™t doctors or food scientists so we just have to listen to what people tell us and make up our own minds. There are people on both sides of this issue and both make some interesting points but I think itâ€™s safe to assume no matter what side of the fence you fall on we can all agree that eating foods fired in any type of oil is something we should do in moderation.