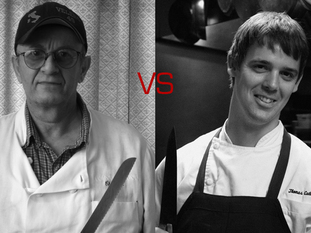 If youâ€™re lucky enough to live in the Salt Lake City area you are in for a real treat. Two local chefs will enter into the kitchen stadium to prove who is the true master of the swine in â€œBattle Bacon!â€

Robert Deni from Cucina Toscanna and Tom Call from Fresco Italian CafÃ© will have to show their skill be creating three different dishes using glorious pork belly. At first that doesnâ€™t seem too hard, I can think of twenty different dishes right off the top of my head but since the popularity of bacon has skyrocketed thanks to the internet it gets harder and harder to make a truly original dish.

To win this they are going to have to make something new that will blow away the bacon fanatics because unlike other kitchen battles their food isnâ€™t just going to be judged by some up tight food critics the audience also gets a voice. Audience members will taste the dishes and vote for their favorite.

It all takes place on Tuesday, Jan 31st from 6:30pm to 9:00pm at the Ferguson Showrooms in Salt Lake City. Tickets are $39 a person and can be purchased at chefwar.com

If anyone out there gets a chance to go please snaps some photos and videos for us and if your able to sneak out some of the samples and send them our way.