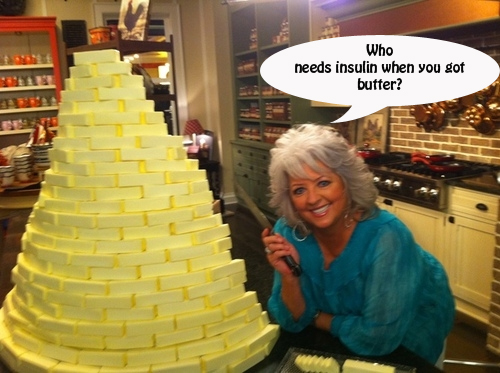 Celebrity chef Paula Deen recently made an announcement that sheâ€™s been diagnosed with type 2 diabetes. For anyone thatâ€™s actually seen her show this comes as no surprise. Paula is known for making good old fashion home cooking and that means lots of butter, red meats, and grease. In other words it means she makes food people actually want to eat.

A lot of people are contributing her diabetes to the food she cooks but I donâ€™t think thatâ€™s very fair. Sure she featured The Ladyâ€™s Brunch burger on her show, a burger topped with egg and bacon served between two glazed doughnuts and her restaurant â€œLady and Sonsâ€ in Savanna Georgia has an all you can eat buffet featuring fried chicken, gravy, and butter soaked collared greens but even Paula herself knows her food isnâ€™t healthy.

Paula never once made the claim that her food was healthy and actually says that people need to enjoy her creations in moderation. Just because her show â€œPaulaâ€™s Best Dishesâ€ is on almost everyday doesnâ€™t mean you should eat what sheâ€™s cooking every day. Itâ€™s called self control.

Type 2 Diabetes isnâ€™t caused from any one type of food. If that was the case a person could just cut out that food and be good to go. One of the biggest contributing factors in getting â€œthe sugarsâ€ is being overweight and yes a case could be made that Paula Dean style food makes people over weight but once again thatâ€™s only if you let it.

Paula has said that she will not change the way she cooks and I for one applaud her for that. Every time I turn around I see more and more of the delicious food I grew up with disappearing. Itâ€™s like if something isnâ€™t the healthiest choice it should be thrown away and never aloud to be eaten.

No one is saying BBQ bacon cheese burgers are healthy but that doesnâ€™t mean you canâ€™t have one every once and awhile. It all comes down personal responsibility. Paula Deen is a good chef and she understands what people love when it comes to food so donâ€™t just abandon her because her recipes are unhealthy instead use her recipes to treat yourself once a week or so.