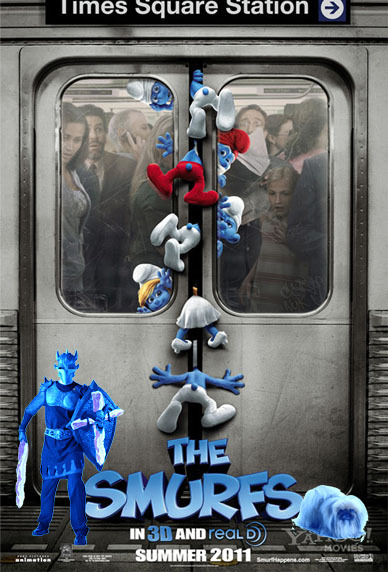 Well itâ€™s once again time for Hollywood to rip out your heart and take a big dump in the wound with the release of The Smurfs. Itâ€™s a typical day in the village, everyone is just smurfing around until they are discovered by the evil wizard Voldemortâ€¦ or I mean Gargamel. Gargamel canâ€™t contain his bigotry anymore, so he dawns his large flowing robe and chases those blue people out of there homes. While running for their smurfing lives a few of the Smurfs take a wrong turn and get sent through a portal to New York City where they meet up with Doogie Howser MD and precede to do all kinds of cute disruptive things that cramp Doogieâ€™s style. Unfortunately not even in this brave new word can the Smurfs hide from the Gargamelâ€™s racist rage. The wizard follows them to New York to continue his genocide.

I have so many problems with this movie I donâ€™t know where to begin. It seems that every time some studio signs a dealt to get the film rights to a popular cartoon or TV show it also comes with a mountain of crack that contractually must be smoked before working on the script. Then when the writer is at the appropriate level of tripping balls he decides the best course of action is to change everything that made the show popular to begin with.

For some reason Hollywood doesnâ€™t think stories based on cartoons can work unless those characters are placed in our world. That is exactly what their doing with the Smurfs and it never ever works. I donâ€™t want to see the Smurfs running around our world trying to figure out how toothpaste tubes or light switches work; I want to see them in their own smurfing world, going on adventures. They would never try to pull that shit when adapting something like the Lincoln Lawyer but when it comes to the Smurfs, Fat Albert, Mario Brothers, and Masters of the Universe they think itâ€™s ok. This is exactly why every time Hollywood makes movies based on something from our childhoods we cringe at the thought of it. These filmmakers are truly not fans of the creations they are currently butchering because any person that has ever seen the cartoon even once knows this is a bad idea. Then if setting this thing in New York isnâ€™t bad enough they decided to create a couple new Smurfs for the movie. Thatâ€™s right I guess the hundred or so Smurfs that appeared in the comic and TV show just werenâ€™t good enough to use and we needed two new ones. All those Smurfs you love will now be joined by Gusty Smurf, a kilt wearing Scottish stereotype voiced by Alan Cumming and Panicky Smurf that as you can guess panics a lot.

Just when I think things canâ€™t get any worse I hit up IMDB and find out that George Lopez is in this thing doing the voice of Grouchy Smurf. Seriously ever time I turn around that no talent kidney stealing womanizer is in another kids movie. When it comes to kids movies would it kill the movie industry to hire an actor thatâ€™s not a big piece of shit. And while were on this topic whatâ€™s the deal with hiring miss â€œI run around half naked all the time, singing songs about being probedâ€ Katy Perry to voice the wholesome Smurfette. Maybe director Raja Gosnell has some kind of weird Smurfette fetish.

Overall I think this movie will be horrible and I donâ€™t want to see it at all but thatâ€™s not going to stop it from making money. Kids will watch literally anything as long as there is some kind of cartoon element and funny voices and the parents are just glad they can take them to a movie they might actually pay attention to.